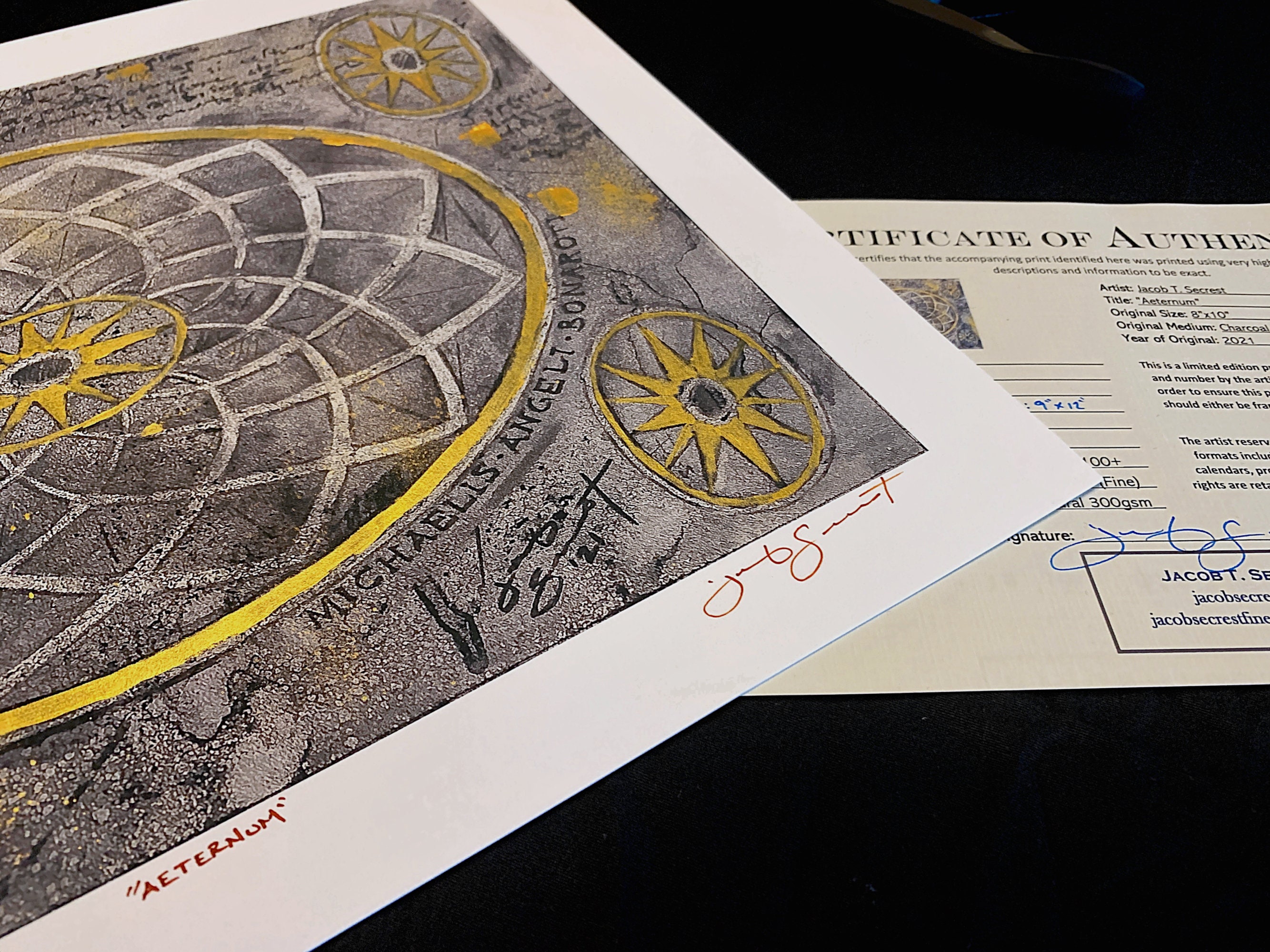 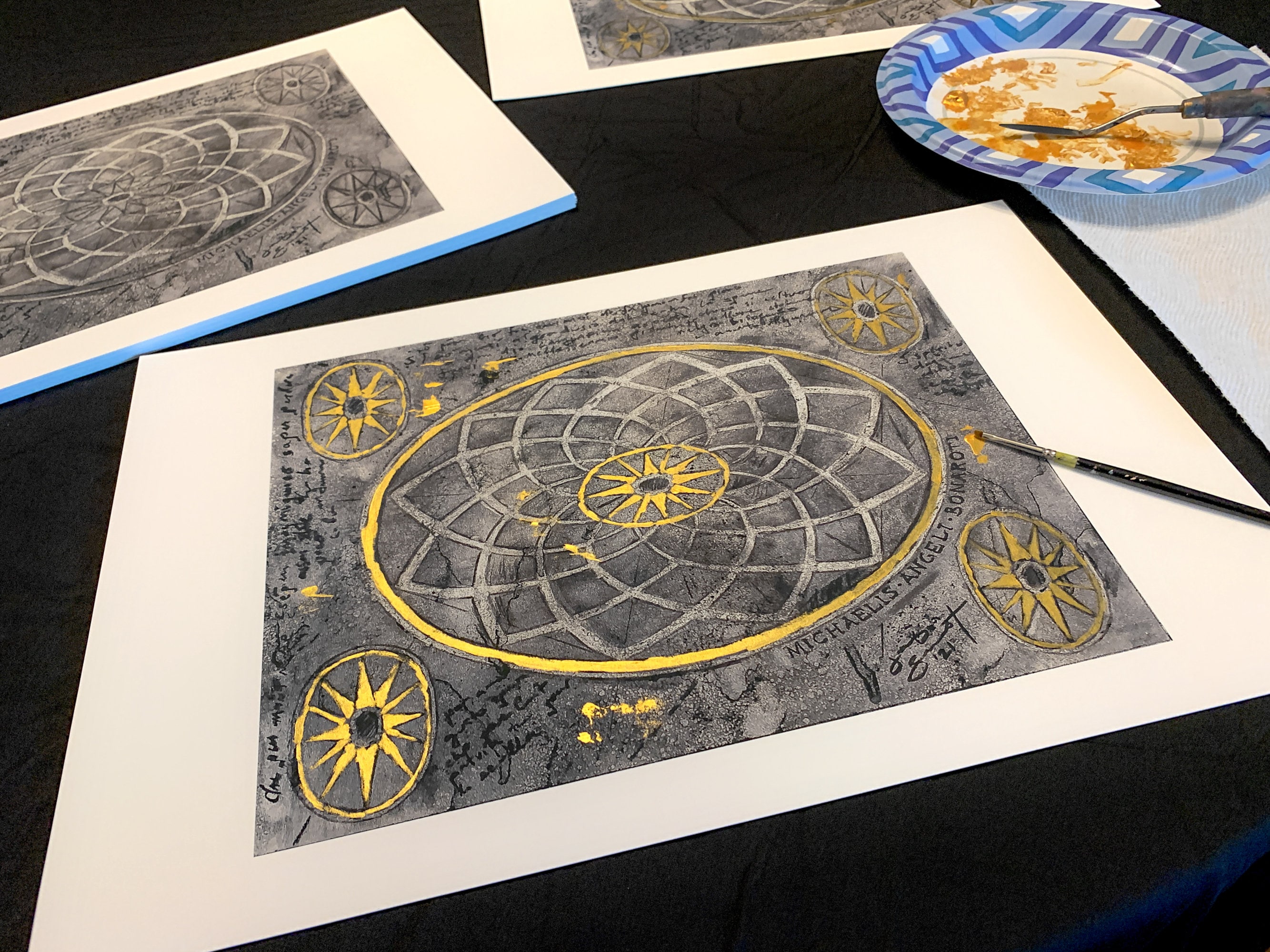 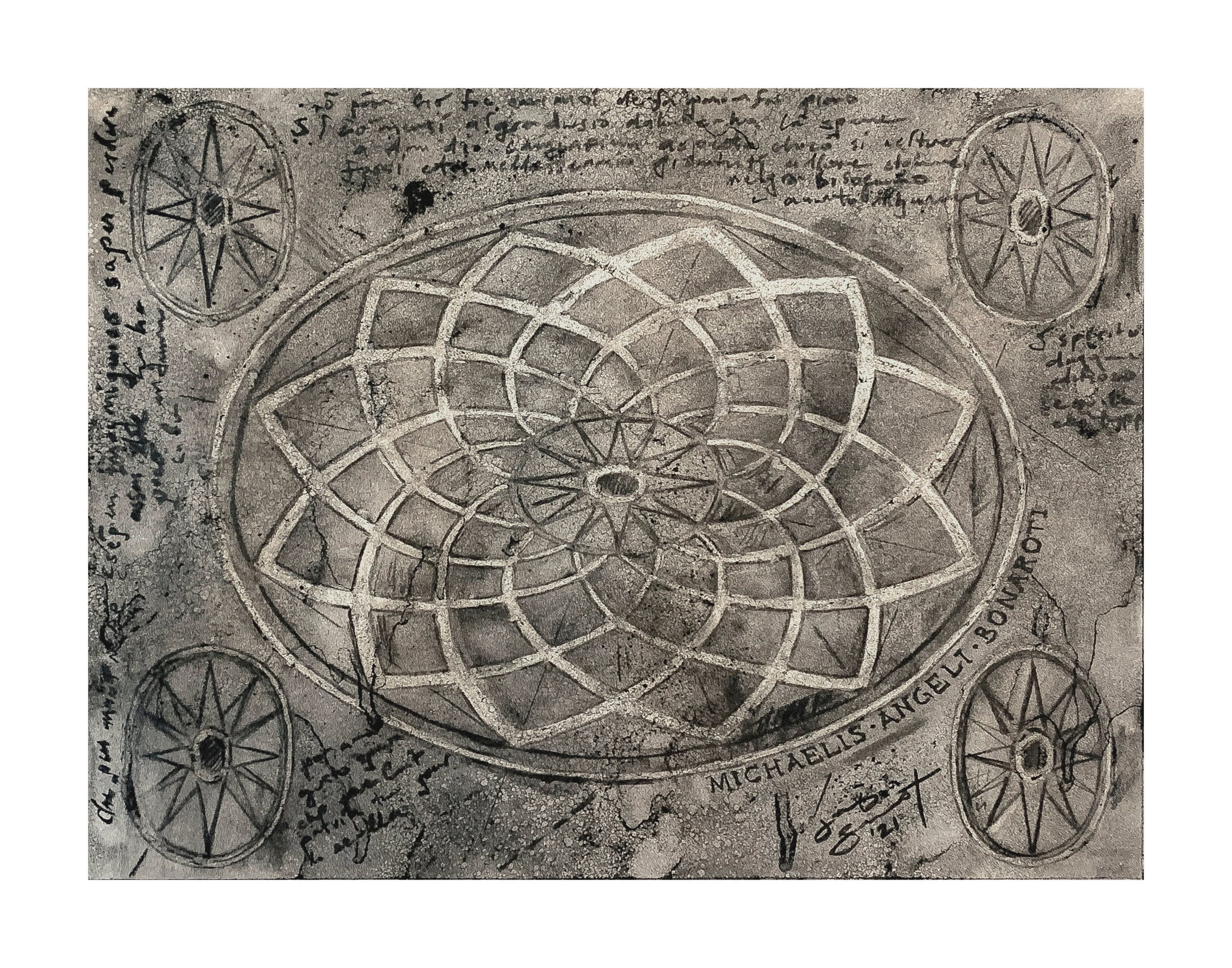 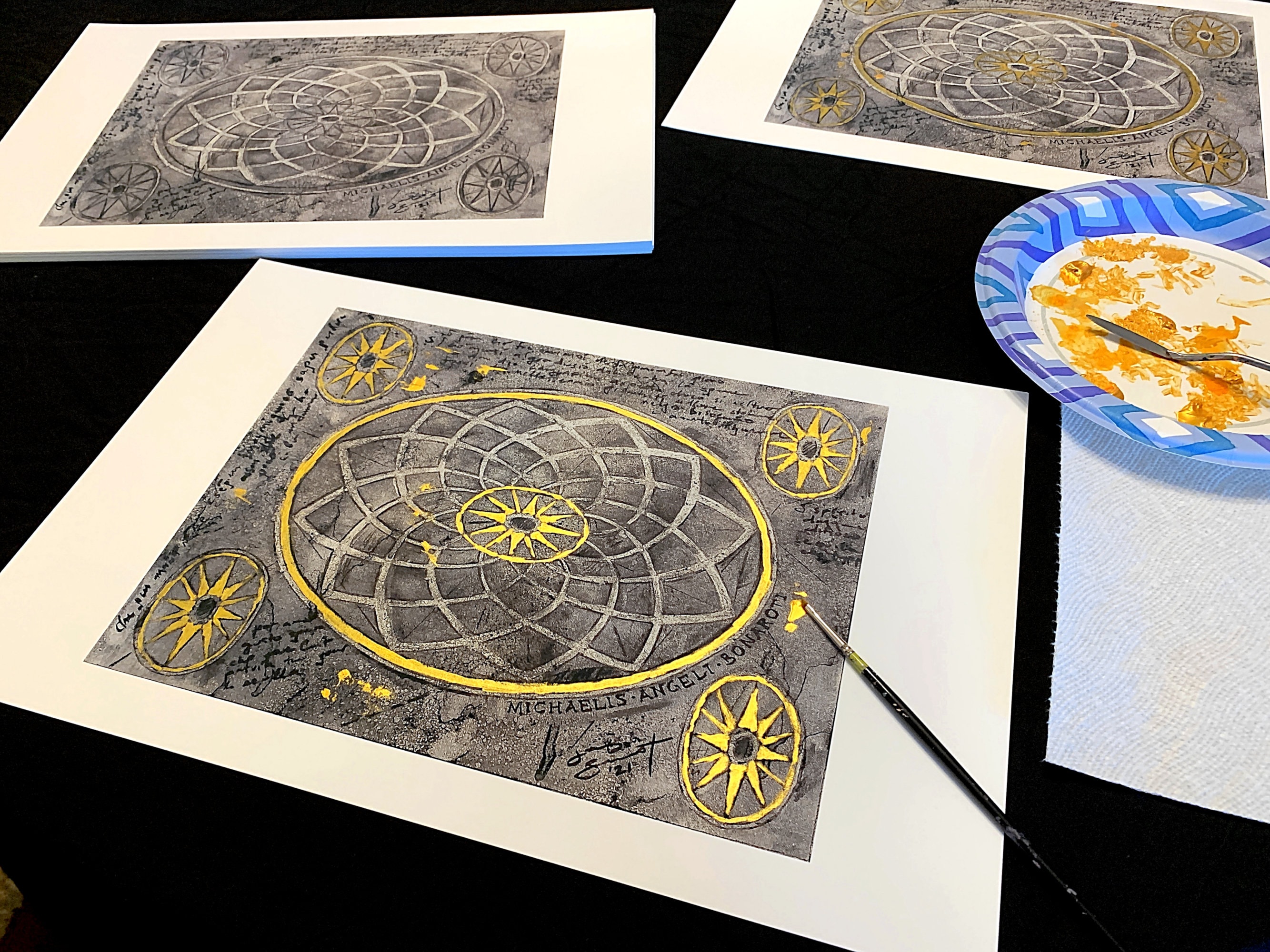 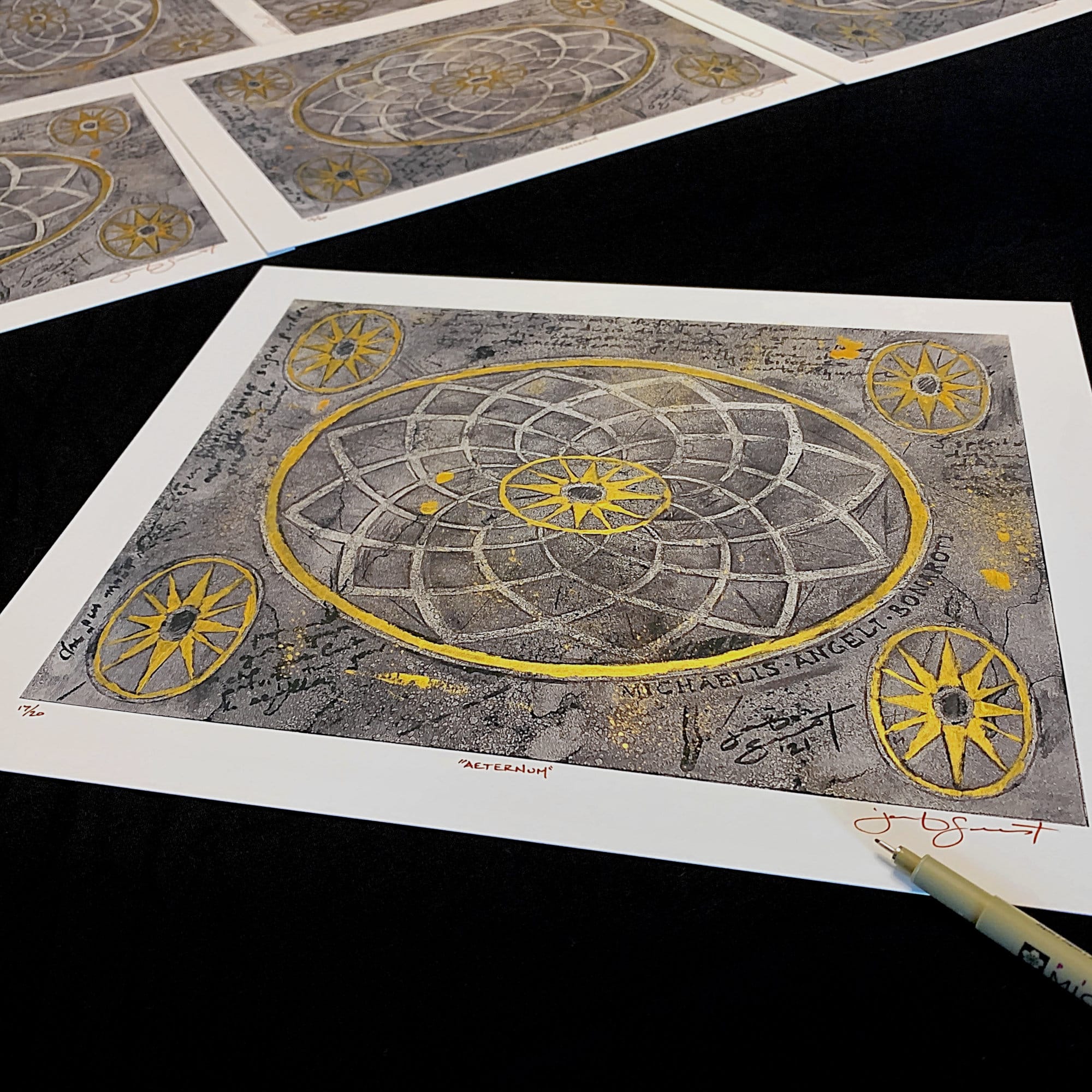 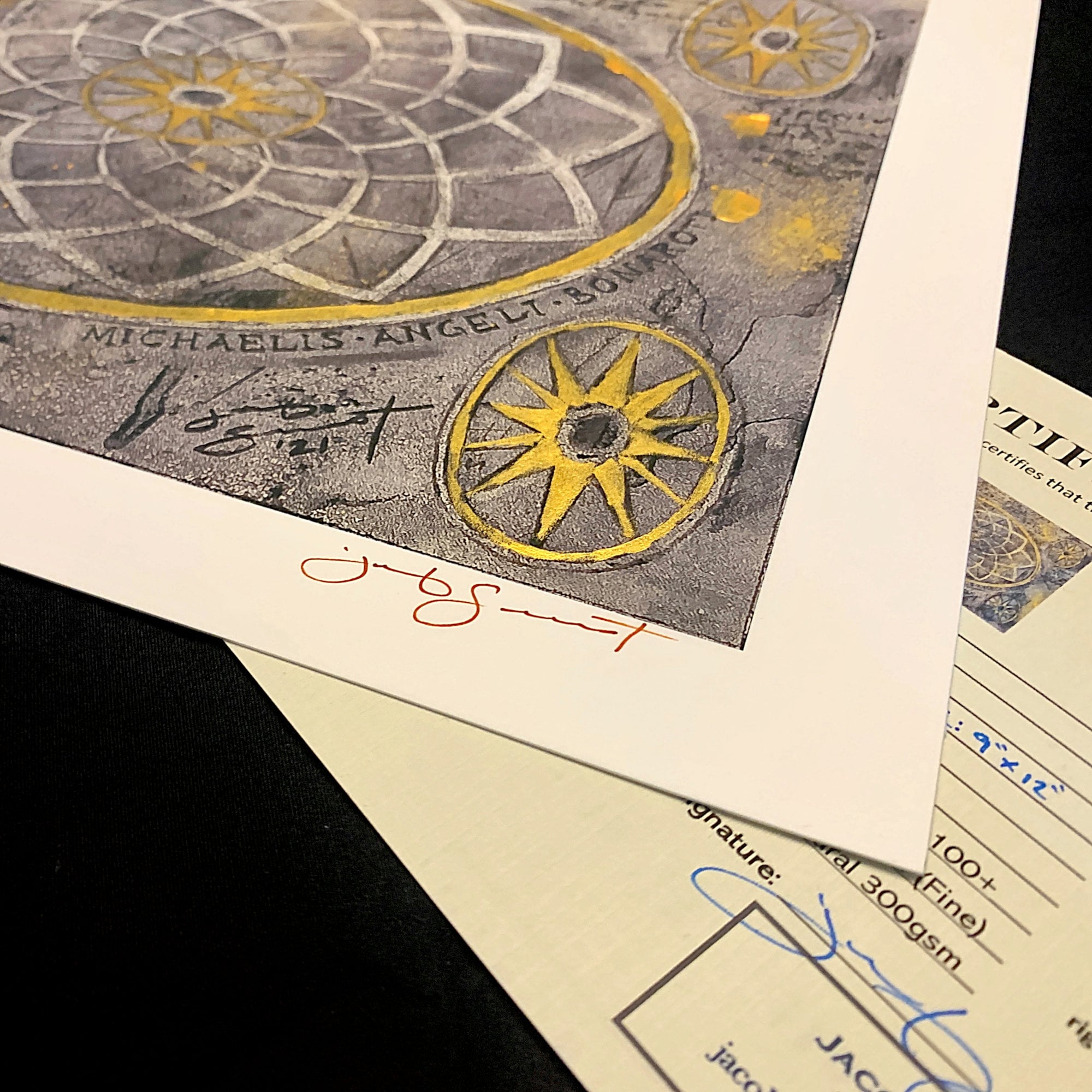 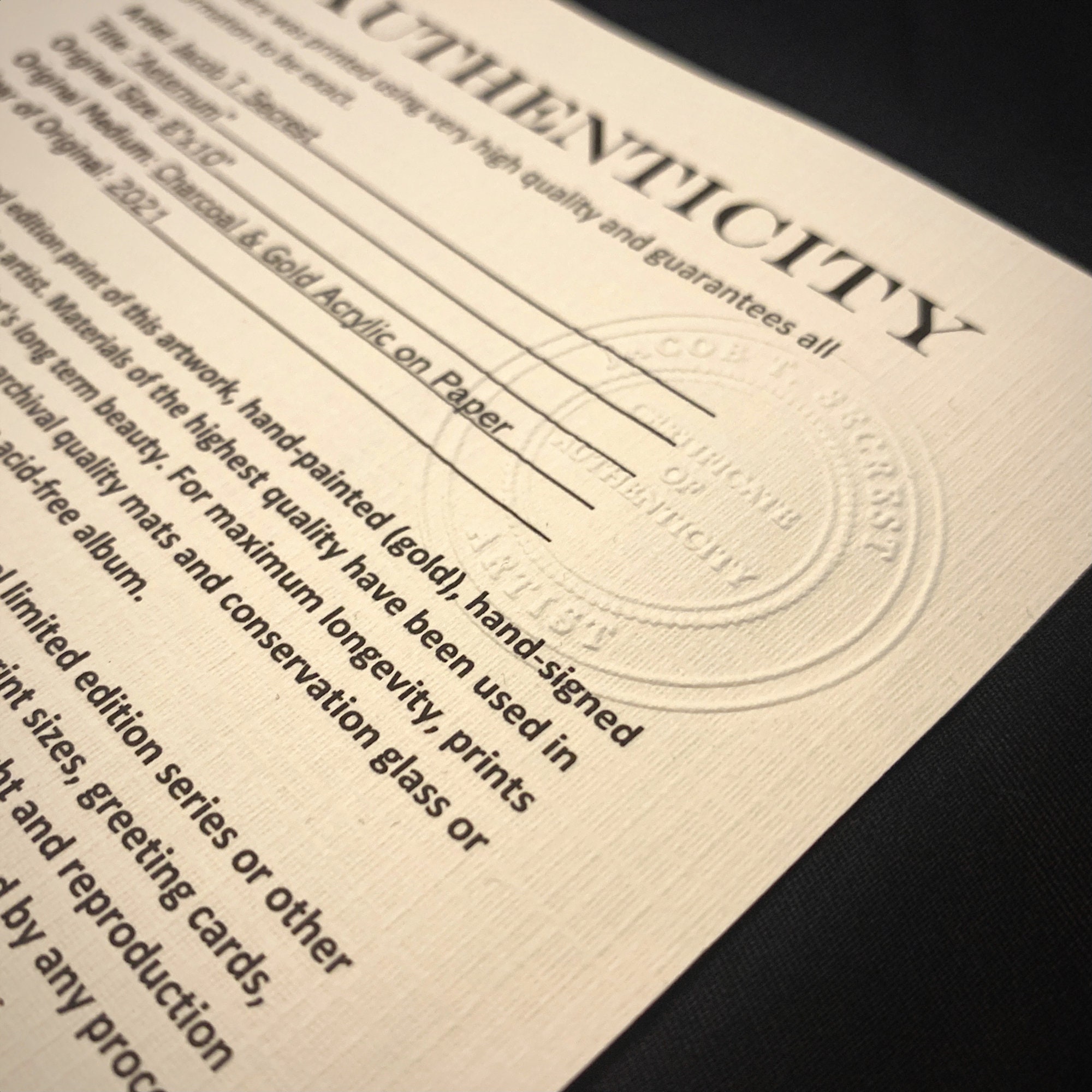 These special limited edition prints have been hand-painted (gold), hand-signed and numbered by the artist. The hand-painted addition of the gold paint makes each of these a unique piece. Materials of the highest quality have been used in order to ensure this print’s long term beauty. For maximum longevity, prints should either be framed with archival mats and conservation glass or placed in an acid-free album.

Last year, in 2021, I was commissioned by my sister to do a unique piece inspired by Michelangelo. A couple of years prior, my sister and her family visited Rome, Italy to attend the open house and dedication of the Rome LDS Temple. The influence of many of the great Italian Renaissance artists and sculptors is seen throughout the building design, art, and statues. This oval design with a twelve-pointed star in the center surrounded by an overlapping petal pattern was used multiple times throughout the building in the floor tiling and on the ceiling. But where did the design come from?

In 1536, Michelangelo Buonarroti was commissioned by Pope Paul III to renovate the Piazza del Campidoglio on Capitoline Hill, which is one of the “Seven Hills of Rome”. He created extensive plans for the Hill which included this pavement design for the square. He also proposed plans to renovate and remodel the palazzi (palaces) on the sides of the square along with the construction of a new palace. However, the extent of his project was so grand, and the execution took so long, it was never completed during his lifetime. Even after the renovations and new constructions were complete, the square pavement design wasn’t completed until 1940 by order of Mussolini and following Michelangelo’s original plans.

But what does the design mean? The design is so full of symbolism, some explained by Michelangelo at the time and others open to interpretations.

His extensive plans included facing this pavement design towards the St. Peter’s Basilica and Christian church and away from the Roman Forum. It was a symbolic gesture that the church was the true political center of Rome and where to look for guidance. But then again, this project was commissioned by the Pope.

The location of the plaza on Capitoline Hill was of pivotal importance in Roman history but, prior to the commission, had become worn and unappealing. With the oval design, Michelangelo wanted to restore that place as the Centre of the World or Umbilicus Caput Mundi. Besides Rome, Jerusalem and Constantinople have also been described as Caput Mundi.
I’ll try not to overcomplicate some of the symbolism and additional connections between Umbilicus and a holy, oval stone at Delphi in Greece known as Omphalos (navel) which was believed to mark the exact center of the universe. The umbilicus (more commonly known as the belly button) is located at the very center of the circle in Leonardo da Vinci’s “Vitruvian Man”. In Michelangelo’s design, he placed an oval “stone” in the center, surrounded by an overlapping geometric petal design (possibly symbolizing the latitudes and longitudes) to an outer oval, and in the very center he placed a twelve-pointed star. The visual effect was that if you stood in the center, it would give the feeling of being in the center of an enormous sphere or universe. An oval itself, like a circle, has no starting point or end point and continues infinitely and eternally.

The twelve-pointed star has been interpreted in various ways. Some suggest that Michelangelo used it to symbolize the constellations and combined with the design of the universe in the oval, the popes may have found it contrary to what they wanted to portray and for that reason never completed the pavement. As I mentioned previously, the pavement design wasn’t completed until 1940 by order of Mussolini and following Michelangelo’s original plans. Other possible symbolic meanings of the twelve-pointed star include the twelve disciples or twelve tribes of Israel.

Nonetheless, it’s agreed that Michelangelo wanted the design to signify the center of the world, universe, or whatever (belly button), and pointed to church as the source of truth and power. There are various additional interpretations of much of the symbolism in the design, but hopefully this will give y’all some insights as you find your own interpretations in the image.

Fun fact: The writings in my drawing are taken directly from some of the notes by Michelangelo which I’ve mimicked in my piece.

Ship items back to me within: 30 days of delivery

Questions about your order?

Please contact me if you have any problems with your order.

0 items in your cart